All effects Dry/Wet amounts have been increased from original files posted to www.Numark.com/ozone


This package also includes LED Fix mapping file for those who may be experiencing freezing or audio drops due to Traktor choking on the amount of LED messages.

Add me on Facebook for downloads, updates and other advanced Traktor Pro maps. I also offer custom Traktor mapping services. Follow the link below and shoot me a message with what you’re looking for. 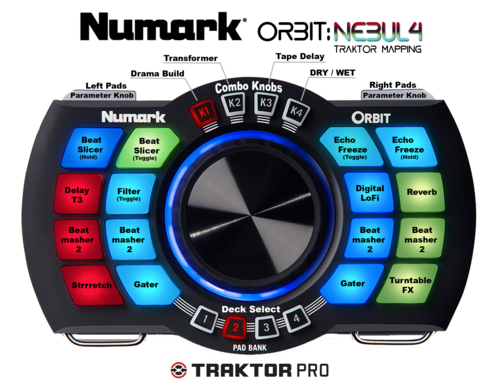 Problem downloading or other issues? Let us know on the forum.
Sign in to comment
-
Comments for v1.0.0

rich giuliani over 6 years ago

Commenting on the LED Fix version .tsi file which does indeed fix my issues with the LEDs going crazy on the Orbit. Seems like there might be a small bug with the Filter (toggle) function on the left side pad. Doesn't seem to work as it did in the other .tsi file version. Notice that the accelerometer controls work for it, but I can't seem get it to toggle on and then off.

Victor over 8 years ago

Hello, I have aprox. 3 mapping pre-sets already created for other controllers and would like to ADD NEBUL4 effects as one of the options. It seems that, when I import the mapping; my other mapping disappear. Is there a way to import NEBUL4 FX and still keep the previous mappings? Thank you for your help.

JWiLL (CTC) over 8 years ago

The instructions outlined in the guide below should help you. http://noterepeat.com/products/numark/controllers/orbit/185-traktor-pro-2-importing-multiple-controller-mappings

dj grave over 9 years ago

Awsome mapping, much better with the wet/dry up! Having a little problem, The Stretch and Gator effects are also triggering my 3 and 4 hot cues, and the Beatmasher 2 buttons on the right side of the unit are triggering my 1 and 2 hotcues..not a big deal but i have to erase the hot cues if i want to use those effects again at a different points of the track. Any ideas on what that could be? Im using a ddjwego,Traktor F1 and aTraktor X1. Thanks for the mapping!

Thanks man! Could be that one of your other mappings has the same MIDI notes for the effects. Go into controller manager and make sure that all of your controllers are set to the specific controller name and not "All Ports".

dj grave over 9 years ago

Thank you!!!! Worked perfect!! Keep up the great work bro.

Awesome! Glad it was an easy fix :)

Great controller and it's this kind of mapping that makes it really shine. I hope Numark paid you with bags of gold for the work you've done. If it wasn't for the mappings it would be a very colourful decoration. Awesome job !

Thanks Trippout! My payment is controllerists like yourself downloading and using it. Happy mixing, Cheers! :)

Other mappings by JWiLL (CTC)