This is a comprehensive mapping for DJ Player Professional on iOS to the excellent Reloop Mixon 4 controller.

The mapping pretty much follows standard labelling throughout, although there are a few exceptions (I may have missed some!);

- Press Shift and CUE button LEDs flash on beat 1...easy to show if all 4 decks are in time

- loop roll button mode works, although I could only map the top 4 pad LEDs

- sampler button mode works as STEMS buttons. The top 4 buttons will mute/unmute each of the 4 stems. The bottom row do nothing.

- the slicer button mode engages DJPP 'FX' button mode...in the latest (beta 10.2.b4) version of the app this turns the 8 buttons into instant Pad FX buttons (no LEDs for these unfortunately) - if you press Shift on the screen you can use a different 8 Pad FX.

The deck Load button LED will flash when the track in that deck reaches near the end of playback...potentially you could link this to beat 1 LED blink instead to have a visual cue of how the tracks are aligned...although they'd be flashing throughout!

The FX can be applied to all 4 decks independently...using the magic of DJPP!

The mapping also has the startup sysex message, so DJPP should recognise the positions of all encoders, knobs etc of the controller when first connected.

Feel free to add / tweak at your will. There are plenty of shades/colours to adjust the pad buttons to. 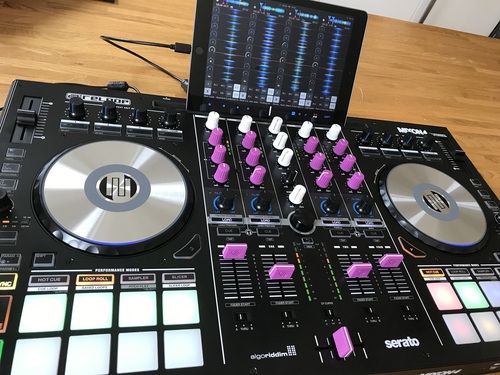 Problem downloading or other issues? Let us know on the forum.
Sign in to comment
-
Comments for v0.5.0

Doogie over 3 years ago

The mapping works great! Just some detail questions: 1) What is the "beat encoder" Is that a button? Which one? 2) "press beats encoder = Mark Bar on beatgrid" - What exactly does that mean? Does this mark the bar under the play head as the first downbeat in a bar? Or does it move the beatgrid to that position? OR or or?

Doogie about 2 years ago

Answering my own questions: The "beat encoder" is the turnable knob at the top right of the MIXON 4 deck where the effects section is. The rightmost knob which can be tourned endlessly. This "beat encoder" knob can also be pressed like a button! This sets the beat grid start position. Very handy!

Amit over 4 years ago

Not working for me. On clicking download it says ‘ open in DJ player pro’, opens the app on click, but the new MIDI option doesn’t show up

Sidney about 5 years ago

@DJ Hombre Where/how can i delete previously assigned hot cues on the pad? What button combination did u use/assigned! Best, Sid

Sidney about 5 years ago

From ur ipad click download file here and then it automatically recognizes the djpp app as destination to save the file in. In djpp just go in midi and ur new mapping will show up there. Just tap it to be ur new default and ur all set to go. :-)

Stefan Lehrner over 5 years ago

Dear Hombre, thank you for your effort. May you can advice me how to bring the mapping to my iPad? Is it possible to have something like an auto - crossfade from left to right and vice versa? Kind Regards, Stefan
Sign in to comment
+
Comments for v0.3.0

Other mappings by DJ Hombre