This script requires Ableton 9.6 or higher , if you are running an older version grab v1.2 from the sidebar

This mapping was made for Ableton 9.6 and is fully compatible with the Midi Fighter’s sequencer mode.

This guide refers to the 2.0 version of this mapping and it will be updated to reflect changes in following versions.

After downloading Twister Ableton Script v2.0.zip from DJTechtools and unzipping it a folder will be created with the same name that will contain this guide and three more files: Twister_Ableton.mfs and a folder named Script.

1. Open the MF Utility and import the Twister_Ableton.mfs file via File > Import Settings.

2. Copy the contents of the Script folder (_Mono_Framework, _Tools and Twister) to your Ableton Live's MIDI Remote Scripts folder.

3. Launch Ableton Live and the script should detect your device and set itself up. If this doesnt’t happen go to Preferences and under MIDI Sync tab select Twister in the Control Surface drop down list and set the correct input and output MIDI ports. 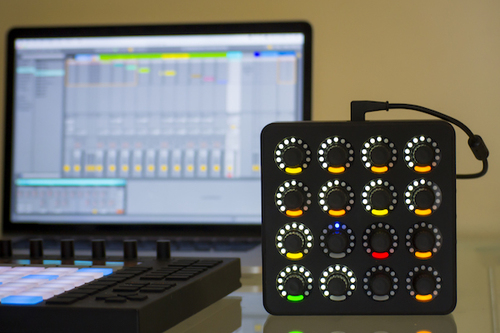 Problem downloading or other issues? Let us know on the forum.
Sign in to comment
-
Comments for v2.1.0

mikael about 17 hours ago

Is there anywhere a better explanation on the different scripts with detailed info what bank , knob , function etc the script affects . Like a map ..it’s so messy to guess what bank and knob does what .. or is it just me ?

Rob Roach about 1 month ago

I just can’t get this thing to work.. I followed the instructions, though the name of the script file to apply to the controller is incorrect. (documentation says filename is Twister_Ableton.mfs, but the file it contains is named MFT8.mfs, but ok) I am never able to see Twister listed as a control surface no matter what I do. Ableton sees midi data coming off the twister just fine, but never can be used as a control surface... Confirmed the files are in place. Any ideas?

Shinyoung Lee about 1 month ago

I already had a pre-existing _Tools folder in my \Contents\App-Resources\MIDI Remote Scripts\ folder. How should I resolve this? It currently contains __init__.py, CukeTestTemplates (folder), InstantMappings-HowTo.txt, and UserConfiguration.txt Any ideas?

Copy over any unique files from the Midi Fighter Twister _Tools folder that do not exist on your pre-existing _Tools folder. Ignore the files that exist in both places. At least in my case, I found the contents of __init__.py to be the same in each folder, so there was no need to change anything on my hard drive.

Was wondering if it's possible to map bank 4 myself considering it has no use now, or does that interfere with this mapping you made?

Bank 4 was left blank intentionally so feel free to map it however suits you best!

Ken about 2 years ago

This is great. The only issue I’m experiencing is with mute on track 1. It takes 2 clicks to mute.

Ken about 2 years ago

Any suggestions on how to fix that?

Same problem here, it happens just with the arm and solo buttons.

Pushing an update to address it, it was an error in the MFS file.

Tolga over 2 years ago

Make sure you installed it in the right location. Works fine here.

Tolga over 2 years ago

now working, yay. i was loading the files here Mac: HD:/Users/[Username]/Library/Preferences/Ableton/Live x.x.x/User Remote Scripts, which is stated on Ableton's website (https://help.ableton.com/hc/en-us/articles/206240184-Creating-your-own-Control-Surface-script). But after following your instructions, purely, started working. thanks.

Yeah the place you were putting them before is for the simple txt based scripts, not a proper fully fledged one. Glad to hear it's now working on your end too

Javi over 2 years ago

Powerful. thank you for this!

Timo over 2 years ago

Thanks for the great script! Is there some documentation on how to edit the script to customize it? I would like to have 8 sends mapped when I select a channel instead of just 2

Mateo Garcia over 2 years ago

Can you launch the clips of each channel?
Show More
Sign in to comment
+
Comments for v1.2.2

Philipp Lange about 5 years ago

Hi there, v1.2.2 stopped working in the current beta of Live. This means once Live 9.5.1 is out of beta, the script won't work in the release version any more. According to the Ableton developers they had to update Python from 2.5 to 2.7, which is probably the reason for the break. Does anyone have the time and skills to update the script? I hate not being a Python programmer...

I'm aware of the changes and I'll update it once 9.5.1 hits the shelves, there is little point in pushing an update before the final candidate is out since they normally change a few things during different beta versions and it might break the script once more.

Philipp Lange about 5 years ago

Right, that makes sense. I'm totally relieved to hear you're updating the script, Live is so much easier to use for me with the Twister. Thanks a million for the work!!

Ableton Live 9.6 is out now and Twister is not in the Control Surface drop down list anymore. Looking forward for the updated scrip =) Thanks in advance for your great support!

ableton autoupdated to 9.6 and broke my setup, Live 9.5 is not showing up in download archive......This was working so well. Why do the twister gods shite upon my digital existence?

9.6 update is coming, taking the opportunity to iron out a few quirks.

thx for doing this! looking forward :))

Philipp Lange over 4 years ago

I think i got this mapping installed, but it's trial and error to see how all this works. Is it possible to get a step-by-step video instruction on how this mapping works? cheers

Yes, a guide would be helpful. So far I haven't been able to determine how it functions.

there is a PDF readme in the download folder, that covers everything pretty well. Is the version you have missing this?

Mic about 1 month ago

Ableton 6.2. Followed instruction but doesn't work. The MF plays notes. Can you help me please?

Dante | Ben over 6 years ago

Can't get this running with Live 9.1.4 and most recent firmware for Twister. No redbox appears when I select the control surface in my preferences. :(

Same thing for me :(

Working now! Thanks a lot!

philippe legris over 6 years ago

Hi padi, thanks for the mapping. Very useful. But can you make the .py source files available fur us to build in them? It would be nice of you. Regards

I just did in the new update =)

Hi, this version will not work. No device lock no stepping no banks ...etc pp Live 9.1.2 64 bit P.s. The free bank for mapping interact with APC 40 controller after a manual mapping + the hanz pedrov script. Badly Anoying... Not really useful... But its from other side one of he best endless led encoder controller.. Hope it comes out better Scripts to map all 4 Banks with remote script (led Feedback ) Wfg

Hey Lumbit. I've already fixed the script side of things but there is a bug in the current firmware that causes the issues you are facing. A new firmware will be out in the next two weeks and I'll push an update to this mapping when that happens.

Ky over 6 years ago

@Padi: I have one of the twister knobs hooked to a gain. It "stutters"/halts for a little range at -17.1 dB. With default factory settings, it doesn't appear to have this behavior. Not sure what the cause of it is though. Would you be open to releasing the source code for the scripts on github? I (and I'm sure others) would be happy to contribute :]

Issue is caused by a bug in the MF Utility when importing a settings file from an older version, I'm rebuilding the MFS file to overcome this and a few other issues.

Ky over 6 years ago

Thank you so much!

Hi, live 9.1.2 win 7 Twister user , The locking feature (bank 2 - encoder 4) will not work .... Delocking is not possible... Bank 2 stay on the first locked device ... And when the first locked device was for example the third device in a track...from now (after I try delock ) I can control all third devices in all tracks, but only the thirds.. Restart Ableton usb cabel Cut nothing helps only new reload (Import) of the mfs. File helps.. But I have a another Problem the bootloader have problem say the log txt .. i can not load a update..I dont know is that the Problem. Mfg S.R.

Great work! I noticed Midifighter Utility settings file 'left button 2 function' is set to shift page, should be 'Note Hold' to navigate the redbox to the left. Cheers

Thanks for the heads up!

Hey guys, Please check the new version, it should fix most of the issues you were having with the previous builds.

Thanks for the continuous work you guys are putting in, will comment on the mapping after some extensive testing, excited to put this baby to use!

Not working for me :( I strictly followed installing instructions and Live recognizes Twister but no instant mapping and no Redbox. I tried all combinations in Live's preferences MIDI SYNC (Trak/Sync/Remote) and even tried killing any other controllers I have without success. I can map manually though but I really want the Redbox working. I have OSX 10.8.5 and latest Live 9.1.2 32bit. Any suggestions? Someone had any problems until it worked?

Hey Fuzz, check the new version. It should be working now.

Lars Roenne Olsen over 6 years ago

How about the build in sequencer, any chance it will work for Ableton (DrumRack) in the near future?

It already works with it. I'm building a special drum rack that splits each column into it's own track so you can have slot filters like in traktor. I'm waiting for Mike to patch a few commands with the current firmware so the layout on the device matches 100% Traktor's. It will be out sometime next week.

Adrian over 6 years ago

Does anyone else have trouble getting the redbox to move left. everything else seems to be working fine but left side button 2 wont move my redbox left.

Adrian over 6 years ago

Edit: On the device bank, after selecting a new device via encoder button 5 or 6. The twister continues to control the parameters of the originally selected device, until you select a new track and then go back. If that makes any sense.. I know its still early days but just some feedback :) so far the potential here is huge and once its all tweaked out my workflows is definitely gonna get a bump. :) thanks for the hard work

Got the same issue here, too

One more thing on the deivice bank. Stopping track clip (button 9 10 11 12) doesn't works either. Somebody got the same trouble?

Thanks for the feedback, I'll have a look and get back to you. What version of Live are you guys running?

Having trouble using this on my MacBook (OSX 10.6.8) seems that the MF Utility isn't reading the Twister, however my Windows version is working with it as intended. Uninstalled the MF Utility and reinstalled with no luck. Otherwise it's a solid piece of hardware, everything in working order except for the software issue I'm having.

Forgot to mention, the plugin for the Twister is missing from my Mac version, any news on an update to the software would be appreciated thanks!

Hey Quentin The MF Utility isn't compatible in the latest version but we are working to bring back 10.6.8 compatibility ASAP.

Cool cool, thanks for the quick response.

Logan Welliver over 6 years ago

Other mappings by padi_04