This is meant to be an effects controller, and that is pretty much all it controls.

It is meant to be an additional controller, not a stand alone one.

There are few other features that aren't native to most controllers that it also includes, like the loop recorder, panning for each deck, and being able to switch flux mode on and off easily.

It has a lot of feedback so you won't have to be in your traktor screen while trying to do your work.

It controls two FX units, because I believe personally four FX units is still a bit over the top.

It is setup to run with 4 decks, but I see no reason it wouldn't work with a 2 deck setup as well.

It does switch between single and group mode, so you can control up to six effects at once, and uses modifiers so that the buttons work correctly in the different modes.

It has a second page for selecting effects, with a full readout of what effect is being selected (It should be noted that if you have changed your effects in traktor this page might be off a little, but it would be an easy fix to change the osc layout to accommodate it, all you would need to do is change some labels)

It uses an xy pad for each FX unit, that control knobs 2&3 in group mode, and 2&1 in single mode.

You also have all the individual knobs (and buttons) for individual control as well.

There are pre and post fader VU meter LEDs, for readout whilst using the controller.

The last thing that is included was really meant for my personal set up was play/pause buttons for decks C&D, because I use remix decks and F1's which don't have play/pause buttons on them. And since there is a lot of feedback to let you know what deck is playing, what effects unit is on, and what deck it is on for, it was helpful to me to be able to shut those off if they weren't in use.

If you have any questions (and/or suggestions) please feel free to email me @ djbreeze52@gmail.com.

I started a thread in the forum as well: http://forum.djtechtools.com/showthread.php?t=74572 , which you could also use to ask questions, offer feedback, and/or offer suggestions.

As I am very open to all three, as matter of fact I really hope to, this is my first map of anything ever, and I'd really like to know if this works the way I intended it to for anyone else, and/or if they were having any problems with it. 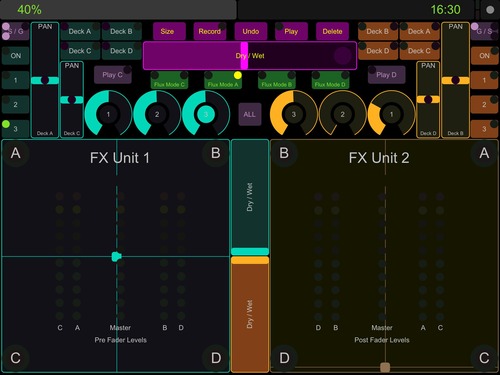 Problem downloading or other issues? Let us know on the forum.
Sign in to comment
-
Comments for v1.0.0

modi about 9 years ago

to the best of my knowledge, android touchosc doesn't allow custom mappings yet, I'm sorry, when it is available, I don't mind altering to fit, more than anything else, it's just picking the correct resolution and adjusting the layout to accommodate the resolution of your android device.

modi about 9 years ago

android touchosc has been update and support custom mapping, iil cheak to see if the ipad ver works

how did it go?

This looks like exactly what I need. I've been doing more F1 only remix sets, so it's becoming overkill to bring the S4 out for most gigs, but the FX controls are essential. Was considering the X1 for FX control, but this might be just the trick. Looking forward to installing tonight! Thanks for the amazing work!

I really hope everything worked out for you. Please feel free to offer any feedback you can about it. I would love to know what your likes and dislikes are about it. Thank you for trying it out.

rob over 9 years ago

Well after a whole day trying several mappings to use as a secondary effects controller with my S4 this is by FAR the best, extremely well thought out and even has the flux mode buttons! I cannot believe theres no comments on this, what more do you people want! And for FREE!! Thanks a lot for this, the hours that have been put into it is there to see/hear!

Rockney Wayne Richards over 9 years ago

Thank you very much, I'm glad it is working out for you. I'm very glad you are enjoying it, please let me know if you think of anything it is lacking and/or if you find any bugs in it.

Hey Rockney! Great work! I was looking for something like that. Thanks for the effort put into it!. I'll be testing as soon as i can. Regards from Buenos Aires.